You can't deceive us to Vote for you, In 2019 - Ohanaeze Youths tells Atiku/Obi 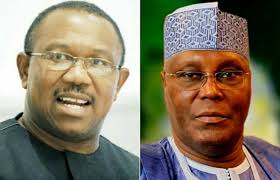 The leadership of Ohanaeze Ndigbo Youth Council Worldwide, Thursday, declared that Ndigbo have not decided on any Presidential candidate to cast their vote for in the 2019 general election.

In a statement issued in Abakaliki by Comrade Obinna Achionye, the Deputy President General of Ohanaeze Ndigbo Youth Council Worldwide, the group insisted that “no few and outdated leaders in the political circle would mortgage the political future of Ndigbo as they did in 2015.”

According to him: “The leadership of Ohanaeze Ndigbo Youth Council Worldwide had a consultative meeting in Abakiliki and appraised the state of the nation with coalition of Igbo groups and resolved as follows: “Ndigbo have not decided on which direction to vote in 2019 and no fewer and outdated leaders will mortgage the political future of Ndigbo as they did in 2015.

“We shouted then that things were not done properly in the South East especially to the PDP chieftains but now they’re heading the same way which is another political catastrophic mission which will be resisted by the Youths and coalition of Igbo groups.

“Ndigbo will not be carried away by euphoria of vice Presidential candidate, an additional State Creation is better in the South East.

“We call President Buhari to seek redress and appease Ndigbo before the years run out to regain the loss of confidence of Igbo Youths, especially in terms of job creation and minimum wage issue, though we applaud Buhari on the massive road rehabilitation in the South East.

“We believe that Ndigbo will have a rethink if the Federal Government revamps Enugu coal mine, creates jobs and creates additional State to south East. With a new state, there will be more political space; with additional Governor, 3 Senators,10 Federal Representatives, 24 House of Assembly members, 20 LGA Chairmen, many Councillors, its better than Vice President.

“We call on Ndigbo to collect their PVCs immediately without further delay from INEC offices in their various LGA. We frown at the information of over 500 thousand uncollected PVCs in IMO state and insist that INEC should make it easier for Ndigbo rather than hoarding PVCs.

“We insist there will be election in 2019 in South East, and we will continue to persuade our Agitators to have a common ground.

“We urge Ndigbo, especially Youths, to be law abiding as operation Python dance is about to commence and by intelligent reports, this Python Dance 3 will be more provocative than the previous ones and agitators should shun acts capable of losing the lives of Igbo Youths especially the incident of a church where Biafran flags was hoisted in Aba, “We call the Army to be more friendly in the Operation Python dance 3,and not to provoke Ndigbo in anyway. Ndigbo will choose who they will vote for in 2019 Presidential election when the chips are down. Nobody will decide for Ndigbo in 2019.

“We call on those Igbo elders to take the back seat as Igbo Youths and Agitators have taken over the driver’s seat on where Ndigbo will vote, as any Presidential candidate dealing with few elders will have a repeat of 2015 episode, where elders collected millions and betrayed PDP, and Igbo Youths boycotted voting, “Ndigbo will decide by January. APC and PDP have equal opportunity in grabbing Igbo Votes in 2019.”
By agwazipost.com - November 15, 2018