All The People that insulted me, must come out openly to apologise to Imo APC- Gov. Okorocha 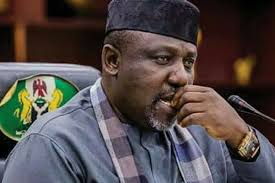 In his determination to assert authority, Imo State Governor, Rochas Okorocha, said yesterday that his detractors, who called him all sorts of names and allegedly engaged the military to truncate his re-election bid in 2015, must apologise to him before he could allow them to have ground membership of the party in the state.

In a statement issued yesterday and signed by his Chief Press Secretary, Sam Onwuemeodo, Okorocha, was angered that he was referred to as “Okoro- Hausa” and “Alhaji in Government House and “APC Boko Haram”, apparently to stop his chances and that of President Muhammadu Buhari to clinch power.

The statement reads: “The All Progressives Congress (APC) Imo state which Governor Rochas Okorocha is the leader will never allow those who called him “Okoro-Hausa” and “Alhaji in Government House” and who branded APC Boko Haram party and harassed members of the party with armed personnel in 2015, to make any valid claim in the party, unless they first apologise to the governor and APC members in the State.


“Some of these elements include Chief Hope Uzodinma who wants to be governor today on the platform of APC and their cohorts in PDP gave Governor Okorocha all sorts of derogatory names during the 2015 elections. They did all they could to ensure that Imo people and indeed, Ndi-Igbo in general reject APC and President Muhammadu Buhari at the poll.
“They called the governor, “Okoro-Hausa” and “Alhaji in Government House” and called APC Boko Haram Party.
By agwazipost.com - October 20, 2018