THE GRAZING ROUTE;; THE REWARD OF THE RENTING ARAB MERCENARIES WHO FOUGHT THE BIAFRAN WAR FOR THE CALIPHATE; EXACTLY AS BAKASI WAS GIVEN TO CAMEROON; Going to 2019 General Election Will Give The Caliphate Another 4 Years to Finalize Their CONQUEST And so COLONIZE And Impose SHARIA--Tony Nnadi 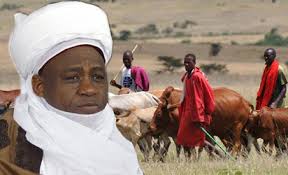 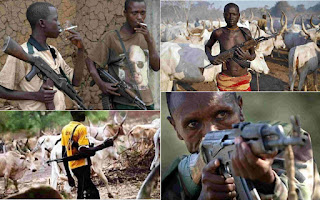 In this EXCLUSIVE analysis, Mr Tony Nnadi, a renowned Attorney and Secretary General of both the Lower Niger Congress (LNC) and Movement for New Nigeria (MNN) declared that herdsmen killings are acts of terrorism and can rightly be described as Ethnic Cleansing; he also said they are just a part of the wider labyrinthine Fulani shenanigans which date back to the immediate post-Uthman Dan Fodio era.

In response to an enquiry from a person who is unable to grasp the reason for the wanton killings in the Middle Belt, by bloodthirsty, Fulani Militia, I had written as follows:

“What the bewildered Peoples of Nigeria are witnessing in the form of a ferocious Southward sweep by well armed Fulani-Militia in an undisguised Ethnic Cleansing Campaign, currently ravaging the Middle Belt Territories, are just a part of the wider labyrinthine Fulani shenanigans which date back to the immediate post-Uthman Dan Fodio era, advanced somewhat under Ahmadu Bello (though inchoate as it was vigorously resisted in the MB); Became part of the bargain for renting Arab mercenaries to fight the Biafra War for the Caliphate.
Most killings and War Theatre atrocities, likenable to what you watch on video these days from the besieged Middle Belt, were carried out extensively and massively inside Eastern Nigeria (Biafra 1967-1970), by these same people doing the gory killings in the Middle Belt now. Same style. Same venom. Same Motive. Same Colluding “Federal Government”


The Grazing Routes “reward” due them after the War, (exactly as Bakassi was promised Cameroon to allow the use of their Territory to penetrate the underbelly of Biafra from that flank), could not be effected because the Fulani had not really grasped the kind of absolute power required to perfect the handing over the Territories.
It became therefore some kind of mutually reinforcing joint interest of the two rogue parties to secure unchallenged power for the Fulani over Nigeria, and so the JV resorted to Boko Haram bloody marauding which yielded the power to them.
Coast Cleared, and the Ethnic Cleansing Campaign required to take possession began in earnest 2015.


The lands of Nigeria have been parceled out in Blocs to the Fulani from different Countries in the West African Sub-Region and Cover all Land all the to Bonny and Epe, with Mandate and Covering Fire, to wipe out and dislodge the Indigenous Populations and resettle themselves there permanently. The Controversial Water Resources Bill at the Caliphate Controlled Nigeria’s National is an attempt to further strengthen the Stranglehold of the so-called “Federal Government” on the Lands that run along Riverbeds and Coastal Areas, thereby facilitating the Land-Grab Mission.
If the rest of Nigeria makes the mistake of going into the 2019 Elections under the Caliphate-Imposed 1999 Constitution, the Caliphate will simply buy for itself, another 4 years to finalize this forceful eviction and takeover of the entire Territorial Space the World calls “Nigeria” by CONQUEST and so COLONIZE and impose SHARIA, unchallenged (as it is all wrapped under the colours of “Democracy”)


The only viable window of escape left for the rest of Nigeria, in the estimation of the LNC, is in the immediate repudiation and dismantling of the Union of Death and Attrition, along the lines of the MNN Map 4-Bloc Map, in which Formations Fresh Post-Nigeria Protocols will be forged by Willing, Compatible Contiguities, excluding the strange Civilization that neither holds life Sacrosanct (Sharia) nor believe that all men are born equal (Feudalism).
We recall when in the run up to the 2015 Electoral the LNC had gone on National Television telling everybody that if that 2015 Election was not deferred to fix the totally damaged foundations of Nigeria, there would be no Nigeria for the winner to govern, no matter which Party won. (Search YouTube with the title: AHEAD OF THE 2015 ELECTIONS”)
That’s where the Country is right now: at the Bus Stop of No-Union and again the LNC and it’s MNN Alliance Partners are frantically shouting out to the rest of Nigeria on what calamities lie ahead, should the Caliphate midwifed 2019 Elections get underway under the rogue 1999 Constitution and being vigorously pushed by the Caliphate but as usual, ignorance, arrogance, greed, obduracy and dishonesty are holding sway. I hope many of those who pin their hopes on PVC on an AK-47 denominated debate will be there to review their folly when the the horse might have bolted from the stable.

Tony Nnadi is an Attorney and the Secretary General of both the Lower Niger Congress (LNC) and Movement for New Nigeria (MNN)
By AgwaziPost - September 30, 2018